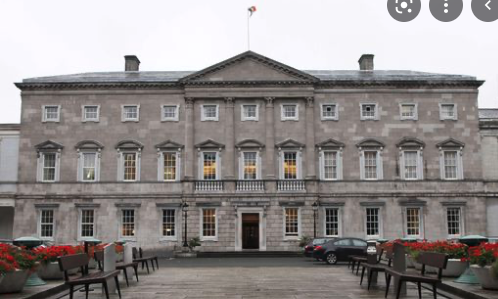 This term Ms Gallagher’s class have been working a lot on history. We have been interviewing our grandparents to find out about life when they were our age.  We asked them questions about their school days and about the teachers that they had. We also found out about the games that they played at home and in school and who their friends were. Our grandparents told us all about the subjects they studied in school and what their favourite subject was. We also found out about a lot of other different things like the cost of sweets and chocolate, when they were young. We all read our interviews to our class and we really enjoyed doing it. Thanks Ms Gallagher.

A visit to the President

On the 21st of October Ms Gilligan’s class went to visit Arás on Uachtaráin . We got a bus at 8.15 and we were really excited. When we arrived there were lots of photographers there taking photographs. We were offered cookies, gingerbread men and lots of other treats. We waved flags and cheered because the President of Cuba Miguel Diaz- Canel was visiting that day too. He was very nice. We also saw two Bernese mountain dogs. There was a crowd of people in front of the dogs so we didn’t get to pet them.  We had a lot of fun. We got to visit Micheal D Higgins’ garden. It was huge! We saw some people planting an oak tree. There was a giant acorn with lots of names on it too. After our visit we took the bus to the bandstand in the Pheonix park and had a picnic. After our picnic we got the bus back to school. It was the best day ever. And yesterday all our class received letters from President Michael D Higgins, thanking us for visiting him. Thanks Ms Gilligan and Nathalie for bringing us on such an exciting tour.

Ms Heney’s class have also been working hard at history this term and have had a lot of fun interviewing our parents and grandparents. We also spent some time making up our own songs in music. First we had to make up a beat and then we added the words to the beat. We worked together in groups of 4 and then we performed the songs for our class. It was great fun. Some of our class also got to take part in the GAA blitzes in Baltinglas and Hollywood. Thanks to Ms Morris and Mr Forde for organising these and thanks to Ms Heney for such a fun first term.

At the end of September the 4th classes went to Glendalough for National Tree day. We left school early in the morning and travelled by bus to Glendalough. When we arrived, each class was split into 4 groups and we did a treasure hunt and played games. We had to look for certain trees and write these down on our clipboards.  After all the activities, we ate our lunch on the picnic tables and got some free time to play. Thanks to Ms Kenny, Ms Morris and Ms Beaubien for organising such a fun day. We all really enjoyed it.

Early in October a lady called Dawn and a dog named Piper visited the school from Dog’s trust.  We found out how dogs are treated in Dog’s trust and Dawn told us stories about some of the dogs in their care. She let us pet Piper, which was great fun. Everyone wanted to have a go. Dawn also told us how important it is to treat dogs properly and how we should act when we meet a dog for the first time. Thanks Ms. Morris for organising the Dog’s trust visits for the whole school.

The fifth classes are doing projects on the history of Blessington. We have learned a lot about many of its special buildings and features such as the Downshire monument, the Horseshoe Arch, St. Mary’s church and much more.  We learned about the year the church was built and who built it. We were very lucky to have a guided tour around the town this week, with the historian Aidan Cruise. We got to see all the buildings and monuments first hand. We discovered that St. Joseph’s hall was once used for dog racing. We also found out that there was once a tram which ran through the town and went all the way to O’Connell St in Dublin. Aidan Cruise also told us a story about a man called Mr W Twyford who refused to leave his home when the lakes were being flooded. He stood on a table and had to eventually be rescued by boat. We have been working on these projects for the past two weeks and hope to present them to the classes after Halloween.  Thanks to Ms McGrath, Ms Heraghty and Ms Nugent for organising the tour and of course Aidan Cruise.

On the 10th of October 5th class went to Dáil Eireann to explore the history of the building and our government. We visited the Dáil and the Seanad and were lucky enough to go into the Dáil chamber itself. We got to see the Dáil in action and Mr Simon Harris, the minister for health, was speaking at the time. We saw various other ministers and TD’s too. After that we moved on and saw portraits of past Taoisigh. Did you know that JFK once came to the Dáil for a visit when he was president of the United States? At the end of the tour we all got a copy of the 1916 Proclamation, which was really good to have. After we left the Dáil we went to St. Stephen’s green for lunch. We were all having a great day, until the pigeons decided to try and take our lunches.  Overall we really enjoyed the day. Thanks again to our teachers for organising the trip.

This term some of the sixth classes have been learning about World War II. Ms Murphy’s class did projects and we had nine days to complete them. We made sure to include lots of pictures and drawings. When the projects were finished we presented these to our own class. We really enjoyed finding out all about the war.

Ms Nugent’s class worked on World War II timelines. We learned about all the important facts and events and made different timelines about these.  We worked in groups of 6 and each chose a different event from the war to work on.  After the timelines were finished we presented them to our class and displayed them in our classroom. Thanks Ms Murphy and Ms Nugent.

Last week Mr Forde’s 6th class made rubber band cars. We all worked in twos to design and make them. We used rubber bands, bottle lids and lollipop sticks. Everyone worked really hard and the designs were great. We had 10 days to finish the cars and when we were finished we raced them through the classroom. Some of the cars travelled a metre. We use a special currency in our class and we can use this to buy a car. Any cars that are not sold will be taken apart and we’ll recycle the materials. We are a green school after all. Thanks Mr Forde for planning such a fun activity.

Ms Lucas class have been doing the beep test each week as part of PE, to improve our fitness levels.   Everyone has to run from one end of the hall to the other and they must reach the wall before the beep.  It gets much harder as you complete each level because the time between beeps gets shorter. At first we found it difficult. As the weeks have passed most of us have improved and are managing to complete more of the levels. We can really notice a difference in our fitness levels. We are hoping to keep going and eventually run the goal mile, later in the year. Thanks Ms Lucas for helping everyone keep fit.

Ms. Nugent’s 3rd class Our class has had a really busy term and have been…

This site uses Akismet to reduce spam. Learn how your comment data is processed.